Here in Brazil, we’ve been discussing distance learning a lot lately, and in flipped learning, there is a part where the students will study at home, on their own, but there’s also an emphasis in the classroom, in the part where you’re face to face with the teacher. So, what’s the importance of those moments with a teacher and how can they use that?
That’s actually the biggest question in flipped learning: we like to say “what’s the best use of a teacher’s or professor’s class time?”. And the answer is it’s not lecture. What is it? Well, it depends. Again, I would say it depends on what you’re teaching, maybe even on the lesson. So, one day, I should do a project; one day, I should have them just practice difficult problems; another day, we can have a debate ? but it’s not lectures. So it turns out there is not one answer, there’s just one wrong answer, I guess, lecture. Let me say this too: it’s changing the role of the teacher, and that’s difficult and it feels like an existential threat to the teachers, that they could be replaced. Some people say flipped learning will replace teachers, but no, it’s gonna make teachers more valuable, really, because they have to do the more difficult cognitive tasks.

You said that sometimes you can use videos at home. Here in Brazil, about 64% of the people have access to internet at home, so how would it work for students who don’t?
So when we first started this, in our school, in the United States, we had 30% of our students with no internet at home, so it’s about the same. So we got creative. One thing our students did have is a DVD player, so we burned the videos into DVDs and they watched them at home. So there are ways to get around that. Some of our students had iPod Touchs, and they brought them with a cable, and then we put it in their device, even though it wasn’t internet connected. So there are ways to play this game, it can be done, you just have to get creative. I was just in Missones, Argentina and there, I was talking to a teacher who was flipping his class, and most of his students have a cellphone of some kind, so he uses bluetooth to get it sent to his students.

You mentioned that flipped learning can be used from primary school to universities. How does it differ from young kids to college students?
What you often see with the youngest students is a submodel of flipped learning and it’s called in-class flipped model. For the little guys, you don’t expect them to go home and watch a video, you actually have that happen in class. So you have a table with ten devices and they watch it, and the teacher works with that half and then they trade, back and forth. So it’s called the in-class model, and with younger students, you often see that take place. But in many ways, it’s not much different, except for that.

And how can it be adjusted to different countries and realities? Is it different in the United States and here in Brazil, for instance?
That’s gonna take some creativity on the part of the Brazilian educators to figure out how to contextualize it for Brazil, because there’s gonna be differences, obviously. But let me also say this: I’ve visited flipped classrooms in New Zealand, in Asia, in the US, in Argentina, all over the world, and in many ways, a flipped class looks a lot like a flipped class. It looks like students actively learning. What they look like is people enjoying themselves, learning.

Is there any resistance from the students to this model?
Yes and no. The research says that students prefer the flipped model, but one interest research says that flipped classroom is easy to get wrong. So there are a lot of teachers who do it and don’t follow the best practices, then students start to not like it. They may be making their videos too long ? we have this list of twelve mistakes that people make when they first flip, and it’s really important that we don’t make those. But sometimes the students are also used to sitting and getting information, so there’s a matter of training them in the right way. Your parents probably said that you’re supposed to eat your vegetables. You may not like the vegetables, but they’re really what’s good for you. And it’s good for you. 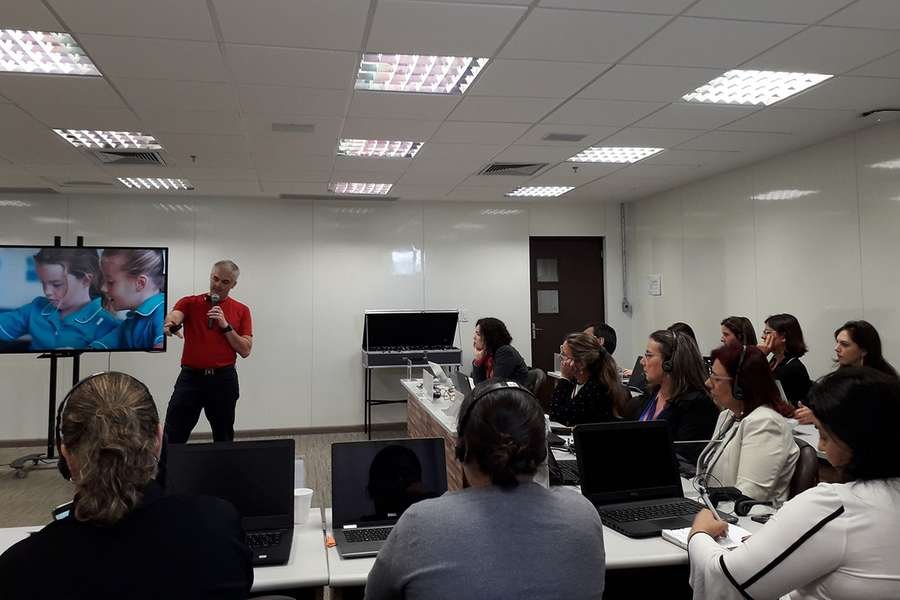 What are some of those twelve ways to get flipped learning wrong?
If you make your videos too long, that’s one way. I recommend no longer than the age of the students in minutes - so if you have an eight years old, that’s eight minutes, but never more than fifteen. So if you’re in university, fifteen would be your maximum. And some people argue it should be shorter than that, but that would be the maximum. Another mistake I see people make is that they don’t teach the students how to watch an instructional video. They think that because they know how to watch Spider Man or something like that, that they can watch an instructional video. That’s not true, you need to teach them, because you don’t want them to watch, you want them to interact. You’re teaching them how to interact with this content. So taking a couple of days, or five days, depending on how old they are, to teach the students how is very important.

And how should you watch these videos?
The standard protocol we found works is that the first day of class you actually watch it together. So you put the video up on a screen, with a projector of some kind, and then you watch it, and then you pause and write some notes: you’re showing them how you would write notes. And maybe the second day, depending on how old the students are, you say “now, you guys are gonna watch the video in class, and I’m gonna watch you watch, and I’m gonna have you take notes and I’m gonna watch your notes and I’m gonna see if you know how to do that”. And you do that until you feel like they’re ready to do it, and when they’re ready, then you start sending them home.

Are there any requirements that a country or a school should have to implement flipped learning? Not just technology-wise, but also the structure of the school, or the formation of the teachers?
One of the beautiful things about flipped learning is that it’s always been a bottom-up change. It started eleven years ago in a small school in Colorado, and it was just two teachers who had an idea, and now it’s spread around the world. So the nice thing about flipped learning is that one teacher can just flip her class in a school, and they don’t have to change the structure. But, that said, when I see a larger scale change, when there’s buying from the head of the school, the principle, the rector, that makes a huge difference. You still want the buying from the teachers, but also support from the leadership ? there’s where really big changes happen. So it’s really best if there is lots of significant buying from the leadership.

If a school wants to start implementing it, where do they begin?
I’d encourage them to get trained well. Like I said earlier, it’s an easy method to get wrong, and you don’t wanna do this without the proper training. If you’re a doctor and you wanna learn a new surgical technique, obviously you need to train before you start doing it. So I would encourage them to get good training on how to do flipped learning.